While investor pessimism was pervasive for most of the first half of 2022, the back half of the year began on a decidedly more optimistic note. Beginning in mid-June and lasting throughout the month of July, both stocks and bonds rallied in uncharacteristic unison on the belief inflation could be brought into check without severe economic collateral damage.

In July, the S&P 500 Index turned in its best monthly return (+9.2%) since November of 2020, as the yield on the bellwether 10-year Treasury note continued to fall after peaking at 3.49% on June 14, following the FOMC’s June meeting. The sharp pivot to the upside preceded a jagged down trend for domestic equities that, at one point, wiped out the entirety of gains made in 2021 while entering bear market territory.

Of course, bond prices also benefited from falling interest rates, which provided welcome relief for fixed income investors following a historically bad start to the year. For the month, the Bloomberg US Aggregate Bond Index rallied 2.4% after plummeting -10.4% over the first six months of the year.

As the global monetary policy tightening campaign to fight runaway inflation ramped up, encouraging signs began to emerge that suggested inflation may soon come off the boil. Most notably, commodity prices started to soften in response to weakening demand. Headlining the narrative of forthcoming inflation relief were falling gas prices, which retreated 16% from a mid-June peak through the end of July. Naturally, investors welcomed this sign, but the outstanding question remained: would the Fed read the same tea leaves and adjust its policy accordingly?

Despite being late to the hawkish party under the assumption that rising prices were transitory, the Fed eventually found religion and has since been steadfast in its resolve to break the back of inflation pressure not seen in forty years. At the same time, policymakers hope to tighten financial conditions only to a maximum level that achieves price stability, while minimizing economic drag. Investors understandably questioned this possibility after observing successive disappointing monthly inflation readings that continued to suggest even more hawkish policy was required to moderate prices.

As expected, the Fed raised rates by 0.75% for the second consecutive time at the July FOMC meeting. During the post-meeting press conference, Chair Powell was asked if he felt the US economy was already in a recession, to which he replied, “I do not think the U.S. is currently in a recession. And the reason
is, there are just too many areas of the economy that are performing too well.” Ironically, the very next day, second quarter preliminary GDP was released, which confirmed a “technical” recession was indeed underway based on the definition that requires at least two consecutive quarters of negative growth. 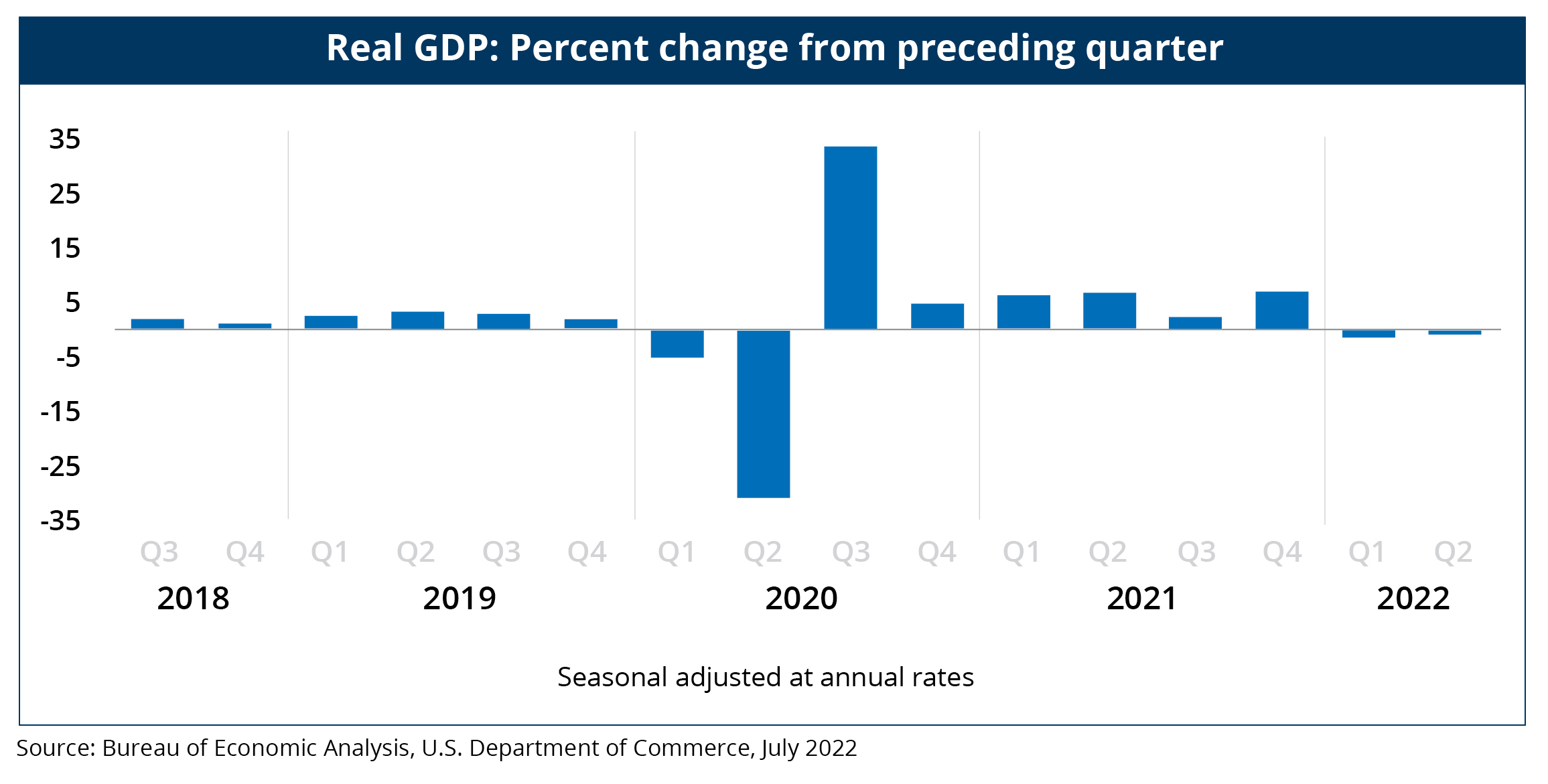 Since recessions are officially declared by the National Bureau of Economic Research, or “NBER,” using far more comprehensive criteria than simply two consecutive quarters of negative GDP growth, Powell may still have credence to his claim. He cited the 2.7 million jobs added during the first half of the year as not being consistent with the notion the domestic economy is contracting. July’s nonfarm payroll report further supported his evidence by blowing out consensus expectations with 528,000 (vs. 258,000 expected) new jobs added during the month and an overall unemployment rate that fell to 3.5%, matching pre-pandemic levels. 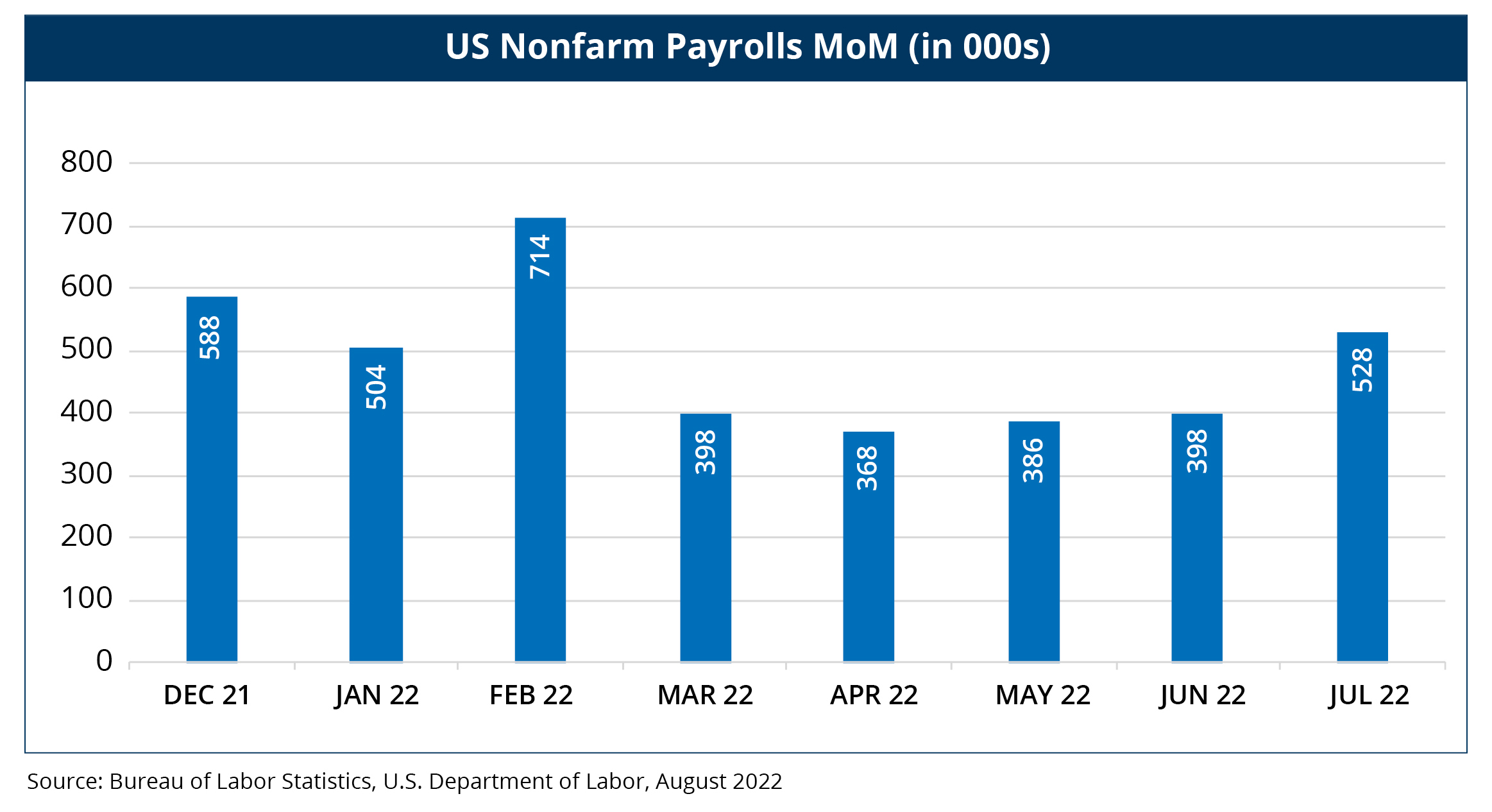 Paradoxically, equity markets are not celebrating this strong employment data as one might expect. Rather, investors are counterbalancing the good news with the implications for future monetary policy and sizing up the potential negative impact from a more hawkish stance. Of course, the thought process goes both ways, so prepare for unusual market reactions to economic data in the months and quarters ahead.

The future macro environment and corresponding policy response remains exceptionally uncertain, as acknowledged by Chair Powell when he responded to a question about the market’s expectation for future monetary policy by saying, “ ... it’s very hard to say with any confidence in normal times what the economy is going to be doing in six or 12 months and to try to predict what the appropriate monetary policy response should be.” He went on to add, “ ... you’ve got to take any estimates of what rates will be next year with a grain of salt because there’s so much uncertainty. These are not normal times. There’s significantly more uncertainty now about the path ahead than, I think, there ordinarily is and, ordinarily, it’s quite high.”

Thankfully, we at do not have to rely on estimates of future economic outcomes. Entering July, our strategies were primarily positioned in cash in response to drawdowns across most asset classes that were only beginning to show signs of a reversal. As the month progressed, buy signals across nearly all asset classes quickly emerged as uptrends gained momentum. By month end, our strategies were at or approaching fully invested status. Only time will tell if this “almost everything” rally will last. As always, we will remain vigilant in adhering to our disciplined risk mitigation process should recent price action prove to be just another bear market rally.

James St. Aubin
Chief Investment Officer
James St. Aubin, CFA®, CAIA®, is Chief Investment Officer for Sierra Mutual Funds and Ocean Park Asset Management. He will have oversight as to all activities of the Investment Management department, in collaboration with Sierra
co-founders David Wright and Kenneth Sleeper. An accomplished investment management executive, his career
of more than 20 years includes leadership roles in asset allocation, manager research and portfolio construction. James earned a Bachelor of Science in Finance from DePaul University and is a CFA® and CAIA® Charterholder.

Investments in Mutual Funds involve risk including the possible loss of principal. There is no assurance that the Fund’s will achieve their investment objectives. Mutual fund investing involves risk, including the loss of principal and there can be no guarantee the strategies and processes discussed will be successful.
Investors should carefully consider the investment objectives, risks, charges, and expenses of the Sierra Mutual Funds. This and other important information about the Sierra Mutual Funds can be obtained in the prospectus, which can
be obtained on our website www.sierramutualfunds.com or by calling 1-866-738-4363. The prospectus should be read carefully before investing. The Sierra Mutual Funds are distributed by Northern Lights Distributors, LLC, member FINRA/SIPC.

DISCLOSURES:
This material is not intended to be a recommendation or investment advice, does not constitute a solicitation to buy or sell securities, and is not provided in a fiduciary capacity. The information provided does not take into account the specific objectives or circumstances of any particular investor, or suggest any specific course of action. Investment decisions should be made based on an investor’s objectives and circumstances and in consultation with his or her advisors. Economic conditions remain highly uncertain and there is no guarantee that the information presented in this commentary will come to fruition.
Neither Ocean Park Asset Management, Inc., nor Wright Fund Management, LLC are affiliated with Northern Lights Distributors LLC.
Sierra Mutual Funds & Ocean Park Asset Management, Inc.
3420 Ocean Park Boulevard, Suite 3060 | Santa Monica, CA 90405 | Sales: 844.727.1813