U.S. stocks keep knocking on the door of record high levels, while the bond market telegraphs big concerns. The disconnect keeps bubbling up in the form of volatility. Right now, plugging the holes in your portfolio can contain drawdowns, while participating in gains that can still be made.

All investments typically rise much more slowly than they fall; in other words, making money is generally a more leisurely ride than losing it can be, no matter what the instrument. That said, certain investments rise or fall with more intensity than others. The sharper and faster moving asset classes include (among others) U.S. stocks, large and small, or ETFs representing a single country (such as Brazil) and are generally considered “risk-on.” On the other hand, while municipal bonds or investment grade corporate bonds can lose value, the pace is typically slower (as can the pace of rising) and are generally thought of as “risk-off.”

A fundamental tenet of investing is that taking risk should result in more return, but that’s a simplistic trade-off that doesn’t work in every given period of time. In our view, what too few seem to notice right now is that we are in the midst of a stealth bull market in risk-off assets.

Examine the chart below. For the 12 months ended September 30, 2019, the S&P 500 (“risk-on”) gained just 4.1%; roughly half of that was paid in the form of dividends with price gains eking out just 2%. On the way to this ho-hum return, the widely-watched index took investors on a wild ride including a nearly 20% collapse late last year, a 6+% fall in May with another drop of the same magnitude in one week during late July to early August.

The Bloomberg Barclays U.S. Aggregate Bond Index, widely recognized as a “risk-off” index registered a 10+% return over the same one-year time period, and the largest drawdown (peak to trough) came in at less than 2%. The disparity is striking; the graph illustrates the magnitude graphically. 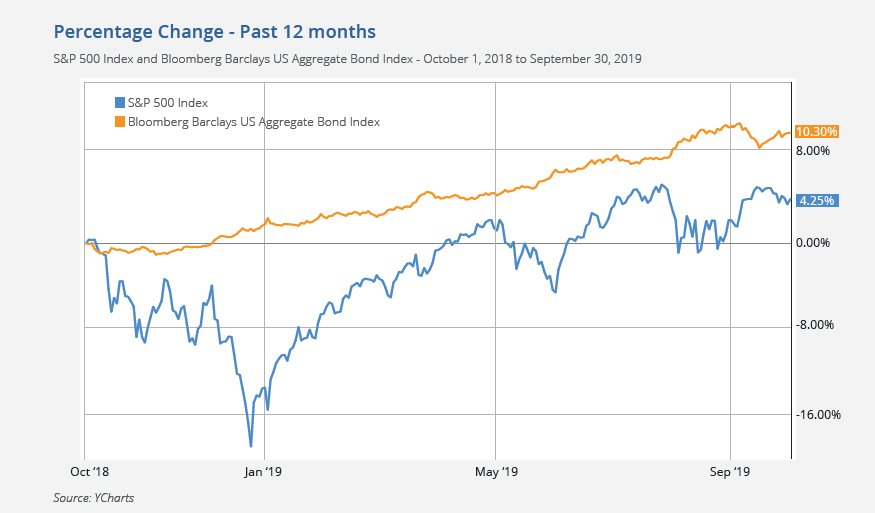 While the return over any given period can look different at any given time, the flight to safety over the past year has been largely ignored. Trade talks, Brexit, the anniversary of big tax cuts, and any number of other factors are pressuring earnings potential and stock prices. Dovish central banks and a slowdown in economic growth are pushing interest rates lower (and negative in many parts of the globe), and pushing bond prices higher. Over the past year, the stealth bull market has been in bonds and “risk-off,” not “risk-on.”

Investments tend to fall more quickly than they rise, producing losses faster than gains. With risks high and a lack of consensus for the future, investors can expect more volatility. Right now, is a good time to plug your portfolio and guard against what can be swift drawdowns. Our quantitative rules-based process provides a sell signal during early signs of trouble that seeks to keep more of what we earn no matter the environment.

Investors cannot directly invest in an index and unmanaged index returns do not reflect any fees, expenses or sales charges.

The Standard & Poor’s 500 Index (S&P 500) is a market-capitalization-weighted-index of the 500 largest U.S. publicly traded companies. It is widely regarded as the best gauge of large-cap U.S. equities.

A drawdown is a peak-to-trough decline during a specific period for an investment, trading account, or fund. A drawdown is usually quoted as percentage between the peak and the subsequent trough.

Ocean Park Asset Management, Inc. is an SEC registered investment adviser. Investments employing Ocean Park strategies are NOT insured by the FDIC or by any other Federal Government Agency and MAY result in loss of principal.