The Fed Makes a Move, but Is It Too Late?

The U.S. Federal Reserve (the “Fed”) has played a large role in stabilizing both financial markets and the economy since the financial crisis years ago. In fact, the Fed has kept its short-term lending rate near zero two-thirds of the time since late 2008. In addition, the Fed bought over $3 trillion of Treasuries and mortgages during the Financial Crisis to keep borrowing costs low. More recently, the Fed has bought an additional $4 trillion of Treasuries and mortgages since early 2020. 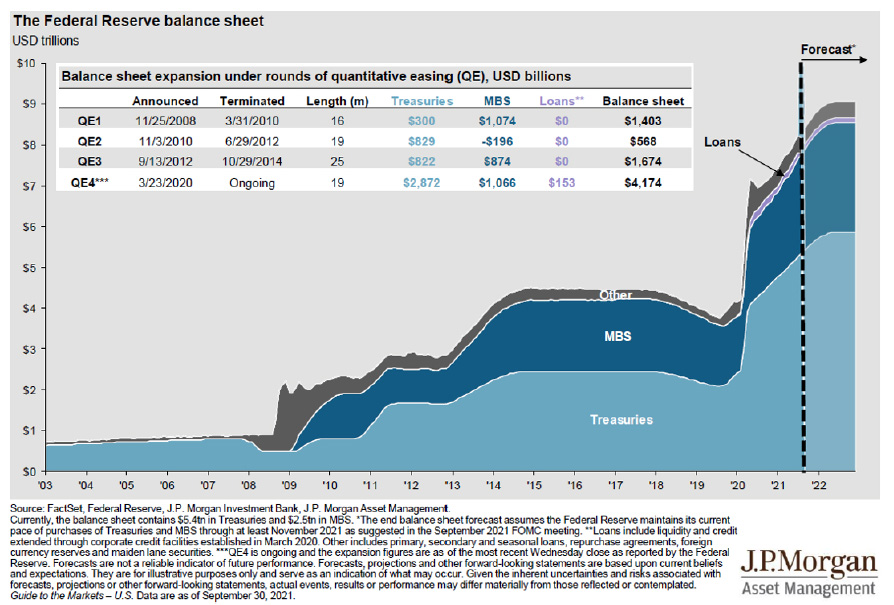 Fed Board members, including Chairman Powell, initially believed that the high rates of inflation seen in the past six months were temporary, driven primarily by short-term global supply chain issues. This made sense since global economies have reopened to a large extent after last year’s near complete shutdown.

Chairman Powell and other forecasters were counting on a ‘Goldilocks’ situation, where inflation quickly fell back to 2-3%, allowing the Fed Board to take their time, gradually reducing the high levels of support. For example, the Fed recently announced that it will reduce its monthly purchases of Treasuries and mortgage bonds later in November, with further reductions spread over many months.

Unfortunately, October’s Consumer Price Index release showed that year-over-year inflation isn’t just high, but at the highest level in 30 years. Consumers aren’t the only ones paying higher prices. In fact, businesses saw the wholesale prices they pay rise a record 8.6% year-over-year in October.

The continued surge in inflation has led both the Fed and markets to now expect two increases in the Fed Funds rates next year.

The Fed will have to walk a tightrope to quickly move back to ‘normal interest rates’ without disrupting economic growth. Inflation expectations at the beginning of the year were right at the Fed’s target of 2%. Inflation fears increased in the second quarter as consumer price inflation picked up. But investors now expect inflation to be near 3% for the next five years, as measured by Treasury Inflation Protected bonds.

Inflation expectations have jumped from 2% at the beginning of the year to almost 3%. 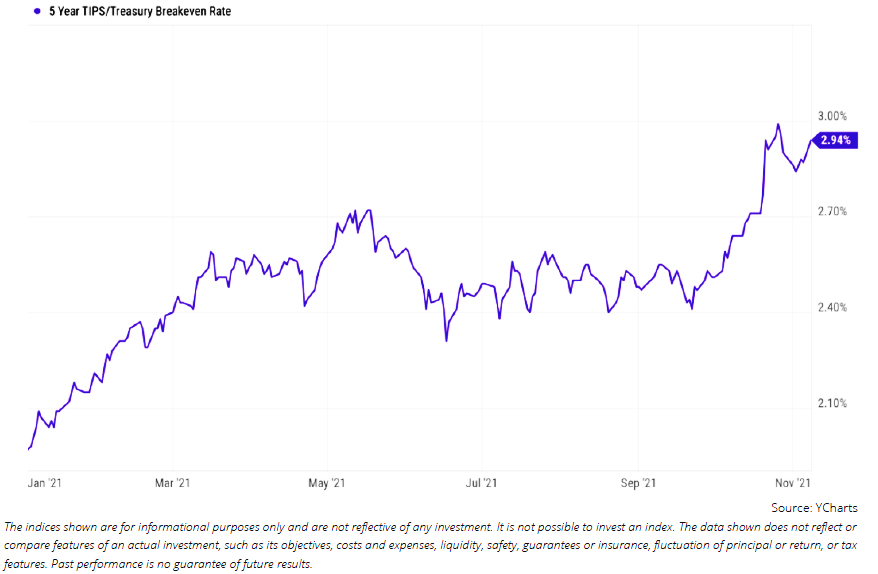 Employment growth picked up in October but at a cost- hourly wages increased almost 5% from the prior year. Higher wages boost consumer demand, which is good, but also lead companies to raise prices well above the Fed’s 2% inflation target to maintain their profitability.

Finally, the U.S. isn’t the only country seeing rising prices. Germany’s wholesale prices increased 13% year-over-year in October. China’s producer prices jumped 13.5% from the prior year, boosted in part due to high energy prices and a shortage of containers. Since the U.S. has large trade deficits with both of these countries, their rising prices will further boost our inflation.

The Fed seems to be between a rock and a hard place. Inflationary expectations have already risen well above the Fed’s target before the Fed started reducing its stimulus. The Fed has two choices. Double down on their bet that the current high levels of inflation are temporary, by continuing to avoid aggressive rate hikes. Or become more aggressive in raising rates and hope that inflation falls without a significant economic slowdown or recession. Our best hope seems to be that global supply chains heal rapidly, allowing inflation to slow significantly, as previously expected.

This material is not intended to be a recommendation or investment advice, does not constitute a solicitation to buy or sell securities, and is not provided in a fiduciary capacity. The information provided does not take into account the specific objectives or circumstances of any particular investor, or suggest any specific course of action. Investment decisions should be made based on an investor’s objectives and circumstances and in consultation with his or her advisors. Economic conditions remain highly uncertain and there is no guarantee that the information presented in this commentary will come to fruition.

Fund investments in lower-quality bonds, known as high-yield bonds or junk bonds, present greater default risk than bonds of higher quality, and income generated from these bonds may be subject to the federal alternative minimum tax.