Riding a wave of optimism that lifted most asset prices, financial markets got off to an auspicious start in the third quarter. Supported by a narrative that the inflation pressure appeared to be peaking and indications the Fed was committed to “data dependency,” investors felt it was time to buy. Unfortunately, the sanguine mood would not last long.

From its early January all-time high through June 17, the S&P 500 Index fell -23.6%. During the following two months, the index rallied 17.4% (its largest gain, trough-to-peak, of 2022) only to sell off for the rest of the quarter to finish in the red for the third consecutive quarter. Even commodities, which had bucked the prevailing downtrends in almost every other asset class in the first half of 2022, posted losses in Q3.

Compounding investor angst amid a challenging environment for riskier assets has been the lack of portfolio ballast typically found in longer maturity investment-grade bonds during episodes of heightened uncertainty. Yields across the maturity spectrum surged higher during the quarter following a brief pause. Year-to-date, the Bloomberg Aggregate Index has fallen -14.6% - its worst nine month decline in the benchmark’s nearly 46-year history.

Renewed pessimism emerged later in the quarter on the heels of disappointing inflation data for August and reframed messaging from the Fed that it intends to fight rising prices at virtually any cost. The Fed’s third consecutive 75-basis-point hike to the Fed Funds rate in September, combined with a planned step-up in the pace of balance sheet runoff (known as quantitative tightening or “QT”) reinforced worries about a hard landing for the economy.

Top of mind for policy markers continues to be a hot labor market that has yet to cool off despite an aggressive tightening campaign aimed at dampening aggregate demand. Initial jobless claims for the week ending September 24 hit another multi-year low, and job openings continue to far exceed the number of unemployed workers according to August’s Job Openings and Labor Turnover numbers. If there is a silver lining in this cloud, at least from the Fed’s perspective, it’s that job openings fell 10% from July – the biggest one-month decline since April 2020. 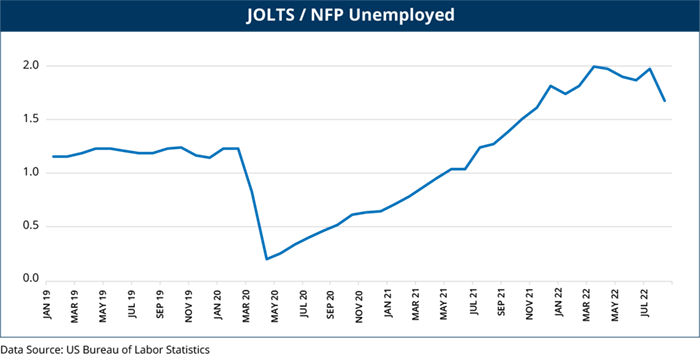 The trouble is that labor markets often react to changing economic conditions with a lag. To be sure, investors crave confirmation that central bankers can grasp what’s brewing on the horizon and recalibrate accordingly. In addition to emerging signs of weakness in the top-down macro data, market participants are also increasingly focused on the bottom-up anecdotes from individual companies. Profit warnings from businesses with high degrees of sensitivity to changes in the economic environment are being closely watched by investors.

One earnings announcement in particular caught the market’s attention in September as a potential canary in the coal mine. After a disappointing second quarter earnings report, FedEx CEO Raj Subramaniam remarked in a CNBC interview “I’m very disappointed in the results that we just announced here, and you know, the headline really is the macro situation that we’re facing.” When asked if the global economy was headed into recession, Subramaniam responded “I think so… these numbers, they don’t portend very well.”

While signs of monetary policy-induced economic stress are not necessarily ubiquitous yet, recent housing data has been quick to reflect the relentless pressure of rising interest rates. With mortgage rates more than doubling since the beginning of the year, housing affordability has plummeted to levels not seen since 2006. Naturally, demand is drying up quickly, causing prices to fall in July for the first time since March 2012 according to the S&P CoreLogic Case-Shiller 20-City Composite City Home Price Index.

A cooling-off in the housing market following a record surge in home prices over the past two years is likely a welcome development in the eyes of the Fed. Ultra-low interest rates and pandemic-related shifts in the mindset of consumers undoubtedly pulled forward demand, while helping the U.S. economy recover. But exactly how this process will work in reverse is unclear. An estimated 15%-18% of GDP is tied to housing-related spending. A major retracement of recent gains in homeowner equity could very well reverberate throughout the broader economy with unpredictable consequences.

Rallies of significant magnitude followed by new lows are not uncommon in bear markets. Eventually, one such rally will lead to the beginning of a new sustained bull market. While last quarter turned out to be the latter, predicting which rally will be sustainable can be a fool’s errand in our view. Our tactical approach focuses on reacting to market behavior, as opposed to anticipating it. Most importantly, our sell signals are designed to limit losses during these instances of false starts. Consistent with our tactical discipline, our strategies followed buy signals across most asset classes throughout July and were nearly entirely invested by the end of the month. As markets softened, our sell signals sent our funds back to predominately cash where they remained entering the fourth quarter.

James St. Aubin, CFA®, CAIA®, is Chief Investment Officer for Sierra Mutual Funds and Ocean Park Asset Management. He has oversight as to all activities of the Investment Management department, in collaboration with Sierra co-founders David Wright and Kenneth Sleeper. An accomplished investment management executive, his career of more than 20 years includes leadership roles in asset allocation, manager research and portfolio construction. James earned a Bachelor of Science in Finance from DePaul University and is a CFA® and CAIA® Charterholder.