Since our investment decisions are not reliant on getting forecasts right, we thought it would be fun to look back at this time last year, both to see where our investments made money and how that compared to the consensus views at that time. Here is a small sample of some 2017 (foolish) expert predictions:

Conventional Wisdom at the Beginning of 2017

“If the Republicans don’t make progress
with their proposed reforms by mid-2017,
the market will correct.”

It’s hard to say there was any progress by mid-year and
with the largest drop of 2017 for the S&P 500 at less than 3%,
the market certainly didn’t “correct”.

“Rates are going up.”

“Market drops should be bought.”

This is some of the most useless “advice” there is.
Obviously, we all want to buy low and sell high.

There are many market prognosticators who get a microphone, but even if the facts and logic seem right, that does not guarantee a predicted outcome at a predicted time.

The inauguration of Donald Trump led to a view that “America First” would translate into restricted trade with other countries, including a declaration of China as a currency manipulator and slapping tariffs on its goods. The logic led to a consensus view that domestic investments should be favored over international ones.

In fact, the impressive gains of the S&P 500 were outpaced by European stocks, which in turn were surpassed by emerging markets. (See the chart below) 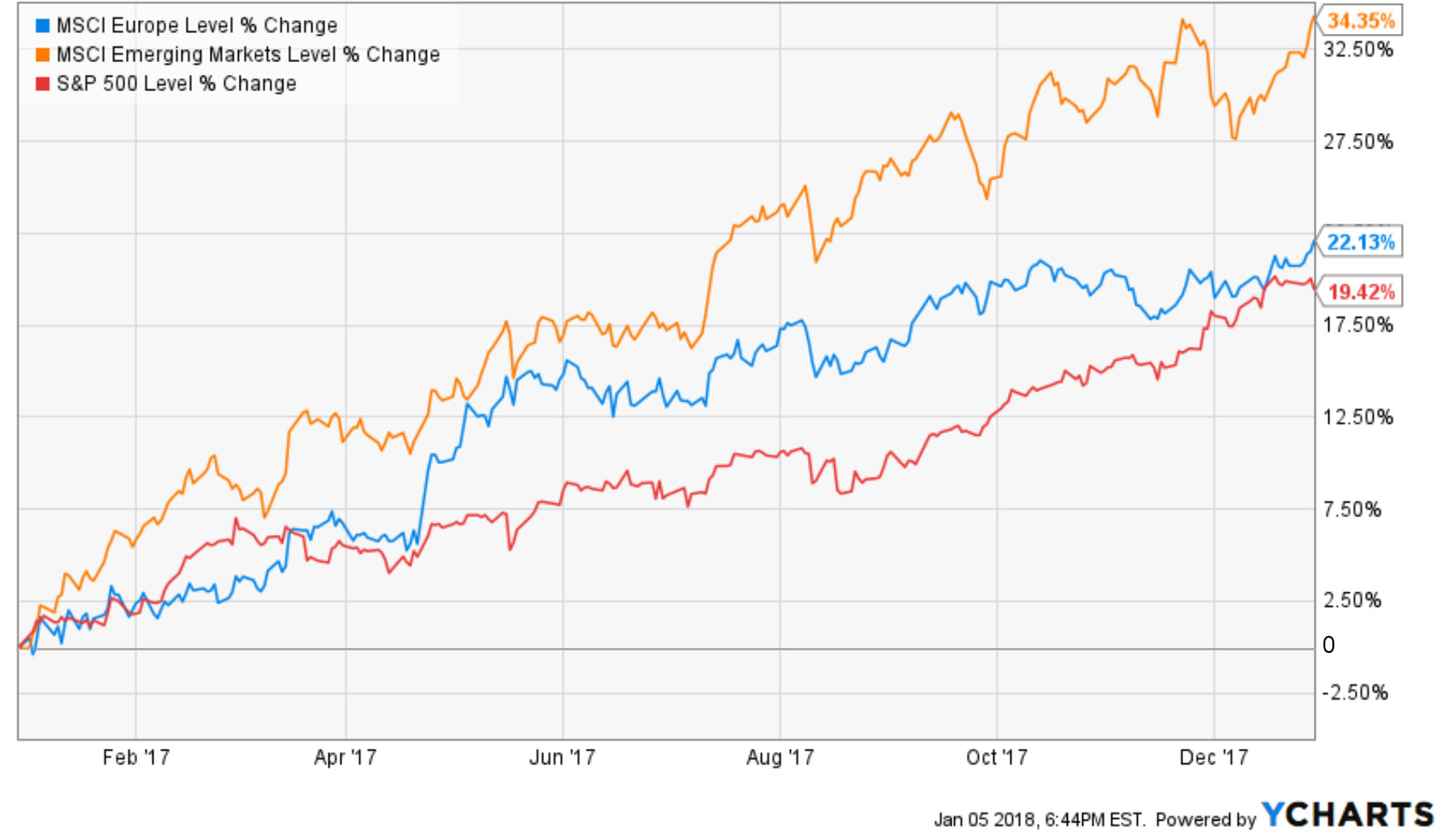 2. Their Crystal Balls Said: Interest rates are going up, so sell bonds.
Score: 0/2

Faster economic growth and inflation resulting from the new administration’s proposed fiscal policies drove many to call for higher interest rates and a negative environment for bonds. In fact, the 10-year Treasury started 2017 at 2.45% and ended it at 2.40%, a decline of a few basis points. Municipal bonds also were expected to nose dive as a result of rising rates (as well as jitters that Trump and a Republican Congress might start taxing muni bond interest). The rising rates and rising populism in the U.S. were also expected to create even greater pressures on emerging markets debt.

During the year, though, nearly all fixed income categories clocked positive returns; high-yield municipal bonds returned nearly 10% in 2017 and local currency emerging markets debt secured the front of the pack gaining over 15%. (See the chart below) 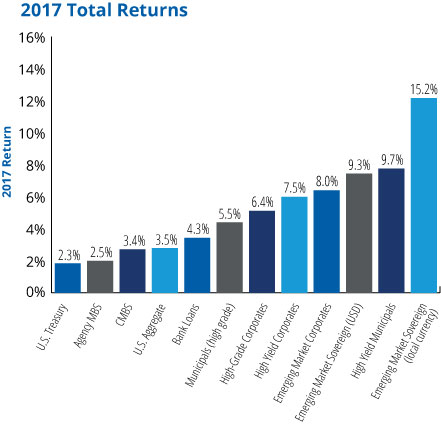 Finally, another common theme at the start of 2017 related to valuations of certain “risk-on” assets. Specifically, a common view stated that the current credit cycle had continued for so long and that high-yield corporate bond spreads were well below their long-term average; therefore little opportunity remained for this asset class.

Although we are quick to caution when valuations are above average, this metric is a terrible timing tool. As you can see in the chart below, counter to consensus prediction for 2017, high-yield corporate spreads declined (erratically) over the year, meaning their yields fell and prices rose. (See the chart below)

Rather than make bold predictions on the direction of anything, we apply a tactical process driven by actual trend changes in the price movement of any particular holding or asset class. Our philosophy and discipline focuses on what can be controlled, not guessing.

Our largest gains in 2017 came from large allocations to international equities, emerging markets debt, high-yield municipal bonds, preferred stocks and high-yield bonds. None of these decisions or profits came from following the outlook of experts, but by staying true to a discipline of reacting to market direction. The results are clear.

While we wish we had a reliable crystal ball, or knew someone that does, when it comes to where to place your money, making or following bold market predictions is a fool’s errand. There are wiser ways to invest.

Ocean Park Asset Management, Inc., is an SEC registered investment adviser. Registration does not imply a certain level of skill or training. For information pertaining to the registration status of Ocean Park, please call 1-844-727-1813 or refer to the Investment Adviser Public Disclosure website (adviserinfo.sec.gov).